Carrying the Fire, by Michael Collins

Posted on 5 July 2021 by fromtheheartofeurope

The fleet also served as transportation. As we soon learned, the geographic distribution of the Gemini and Apollo contractors was well balanced. In the Los Angeles area was North American Rockwell, which made the Apollo command module and parts of the giant Saturn V. In northern California, Lockheed built the Agena, the Gemini’s target vehicle and auxiliary propulsion engine. St. Louis was home to McDonnell, which built the Gemini spacecraft, while its Titan II booster was assembled in Baltimore. NASA’s center at Huntsville, Alabama, was responsible for the Apollo boosters, the Saturn IB and the Saturn V. The lunar module came from Grumman’s Bethpage, Long Island, factory, and the Apollo guidance system was worked out at M.I.T. in Boston. We lived in Houston and launched from the Cape. These were just the main places involved, and the list should be supplemented with dozens of major subcontractors sprinkled around in out-of-the-way places like Grand Rapids, Michigan. At any given time, at least half a dozen different places would be actively seeking, or demanding, an astronaut’s participation in some design review, meeting, simulation, or PR visit. Our small fleet of airplanes was, therefore, a tremendous help in allowing us to go places with a flexibility airline schedules do not permit.

A few years back I found a list of the best books about spaceflight by astronauts, and this was firmly at the top of the list. It took me a while to actually get around to reading it, but it really is very very good. Collins, who died aged 90 just a few weeks ago, was of course the Command Module Pilot who remained orbiting the Moon while Neil Armstrong and Buzz Aldrin landed on it, and because he was on the far side at the time he was probably the only person in the space programme who did not hear Armstrong's first steps live, even though he was closer to the scene than anyone else. But in a sense that's not the point; the point of the book is how Collins, a modest chap who seems aware of his own deficiencies, became part of one of the most audacious technological projects in history.

It's really interesting to see learn how deeply the astronauts themselves were involved in crucial design decisions. Every crew was assigned their modules from quite an early stage, so when they took them into space they would not only be familiar with them, they would actually be using equipment that they themselves had helped to build. And Collins was horribly aware of what could go wrong; orbiting the Moon, he is deeply conscious that he might be going home alone, leaving two colleagues dead or dying on an alien surface. But they make it back.

The first one through is Buzz, with a big smile on his face. I grab his head, a hand on each temple, and am about to give him a smooch on the forehead, as a parent might greet an errant child; but then, embarrassed, I think better of it and grab his hand, and then Neil’s. 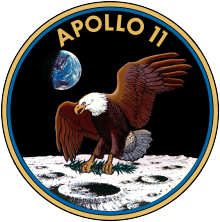 Collins also had some other interesting contributions apart from the flight itself. It was he who actually designed the mission insignia for Apollo 11, the eagle, the olive branch, and the unusual absence of the names of the astronauts, to emphasise the "for all mankind" aspect. He decided at quite an early stage that the firs moon landing would be his last (and second) space flight, went on to do a not terribly happy term at the State Department, and then had a very large hand in setting up the National Air and Space Museum in Washington.

The book is also really really funny in places. His description of the Air Force survival manual had me crying with laughter.

The manual opens on a cheery note: “Anything that creeps, crawls, swims, or flies is a possible source of food.” Then it gets a bit too specific for my taste. “People eat grasshoppers, hairless caterpillars, wood-boring beetle larvae and pupae, ant eggs, and termites.” Not me, babe! Oh yeah? Read on. “You have probably eaten insects as contaminants in flour, corn meal, rice, beans, fruits, and greens of your daily food, and in stores in general.” No wonder the supermarket has been less crowded lately.

And on the best fitness regime for an astronaut:

Under these circumstances, how should one prepare his body for space flight? Theories within the astronaut group ran the gamut. Bon vivant Wally Schirra allowed as how the best way to prepare for a restful experience was to rest. Mathematician Neil Armstrong suggested that a person was given only a finite number of heartbeats in this life, and he was not going to hasten his demise by asking his heart to speed up during exercise. In the opposite corner were the jocks, chief among them Ed White, who might begin a typical day by joyfully running three miles and end it with half a dozen games of squash and handball. In between, inconspicuous under the dome of the bell-shaped curve, cowered the majority.

That "cowered" is magnificent, isn't it!

It was true that as July 18 [his first launch in 1966] drew closer, my thoughts were more and more preoccupied with the flight, but naturally my placid, even temper prevailed, and I recall thinking how grand it was to be able to share my upcoming experience with my family with such composure, equanimity, and good humor. Harking back to this same period, Pat [his wife] says I resented interruptions and was preoccupied, distracted, and totally irritable! God bless her, she waited a couple of years to tell me this[.]

His wife and family were clearly a key element of keeping him emotionally and psychologically grounded, and it's maybe worth noting that he was the only one of the Apollo 11 crew whose marriage survived the Moon. (There is another hilarious passage when, visiting France, he and Pat are compelled to re-enact their own wedding ceremony in the village where they had originally got hitched several years before.)

Anyway, this was a great read, even if you don't care about spaceflight as much as I do. You can get it here.

This was my top unread non-fiction book, and my top unread book acquired last year. Next on both lists is Humankind, by Rutger Bregman.

1 Response to Carrying the Fire, by Michael Collins