Posted on 4 December 2021 by fromtheheartofeurope

Ghost Light is an entirely different matter [from Battlefield]. I approached it with some suspicion, in that I had found several of Marc Platt’s other offerings (Downtime, Auld Mortality, Lungbarrow) tough going. And indeed, Ghost Light is tough going too, but I very much felt it was worth the effort: intricately constructed, well acted, beautifully shot; certainly the best story I’ve seen that was broadcast between Caves of Androzani and Rose.

One of my big complaints of Who of this era is that so little effort seems to have been put into getting the settings right: Ghost Light does not suffer from this problem – from the beginning, and indeed all the way through, you feel convinced that this is a Victorian mansion, even when it turns out that the butler is a living Neanderthal and there is a spaceship in the basement.

Also the Doctor’s bringing Ace back to the scene of her childhood crimes is, if I’m not mistaken, practically the first attempt ever to link a companion to his or her back story.

It is, however, a story very far removed from the normal territory of Doctor Who – surrealist play meets Agatha Christie, perhaps – and despite the quality of the drama it must have further created doubt about what Doctor Who was actually for. Still, apparently this was the last story of the old series actually filmed (although the third last to be broadcast) and it’s nice to feel that that the cast and team must have felt they were going out on a high.

Returning to it in 2011, on the last leg of my Great Old Who Rewatch, I wrote:

I was amazed, rewatching Ghost Light, by just how good it is. Densely packed with literary and cultural and scientific references, transformations, and bizarre imagery, it is a real feast for the viewer. Even if I am still not totally certain I know what it was all about, I find it utterly fascinating; the cast seem to be reasonably surefooted in the peculiarity of what is going on, and the music and sets all add up as well. Having had my view of the worst Seventh Doctor story confounded on this rewatch, I felt confirmed in my view that Ghost Light is the best; and as it was the last story actually filmed, we can say that Old Who ended on a real high.

In the years since I wrote that, Marc Platt has continued writing Who scripts – I think that of the Old Who writers he is actually the only one still really active (Rona Munro has done one TV episode, but that’s it). You cannot accuse him of not keeping the faith. I recently much enjoyed his Fourth Doctor two-parter, The Skin of the Sleek / The Thief Who Stole Time, though I don’t know if I will ever get around to writing it up.

However, on the third time of viewing, but the first time watching it out of context with the rest of the final season of Old Who, I have to say that Ghost Light did not work for me as well as before. There are massive holes in the plot, which are only just covered by the energy and bombast of the leads, especially McCoy. If you are in the mood, you don’t worry about it not really making sense; this time round, I just wasn’t in the mood. 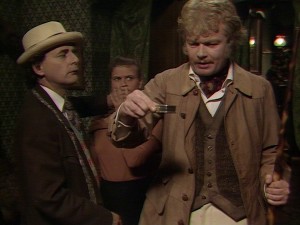 And there are a couple of scenes where actors are standing around with their hands by their sides, waiting for their next line, which is never a good sign. 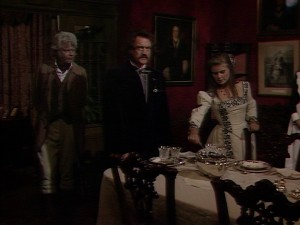 The second paragraph of the third chapter of Marc Platt’s novelisation is:

The ponderous clock reached its third stroke. In the darkened study, white gloved hands touched the shoulder of a girl who sat motionless, staring into the fire.

After enjoying most of Marc Platt’s other work, including his novelisation of Battlefield, I was looking forward to reading this. I’m afraid I was disappointed. Once again, I realise just how vital the direction and acting of the TV version can be; and the intensely visual and subtle original just loses most of its vitality and mystery on the printed page. In particular, we lose the striking visual appearance of Nimrod the Neanderthal and of Light himself, who comes across as just some random and rather dull megalomaniac with super powers.

Scrapes through the Bechdel test: in most of the Ace/Gwendolen scenes they are talking about Josias and/or the Doctor, and the one exception is when they fight, and are then interrupted by Control. A fight is barely a conversation, but I suppose it will have to do. (Mrs/Lady Pritchard appears to communicate with the maidservants by telepathy.)

I have been very inconsistent in my application of the Bechdel test; maybe I’ll start being systematic in 2022. Anyway, It was originally intended for films, not books. Apart from that, nothing to add to my previous assessment. You can get the book here.

The second paragraph of the third chapter of Jonathan Dennis’ Black Archive monograph on Ghost Light is:

As with my rewatch of the story, unfortunately I didn’t get much out of this. It’s a bit of a grab-bag of source material and script analysis, without looking at the actual staging of the TV story as much as the others have done, or indeed at its reception and subsequent reputation. So it’s the first miss of the first six Black Archives for me; which after all is not such a bad strike rate.

(On a positive note, the footnotes work fine, unlike in the Image of the Fendahl volume.)

The completist will want this, but I think there’s more interesting commentary to be found elsewhere. Anyway, you can get it here. 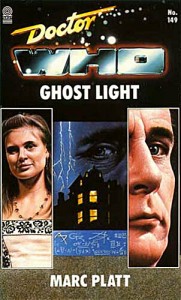 1 Response to Ghost Light, by Jonathan Dennis (and Marc Platt)