Scream of the Shalka, by Jon Arnold (and Paul Cornell)

Posted on 11 February 2022 by fromtheheartofeurope

Next in the sequence of Black Archive monographs about individual Doctor Who stories, this time it’s the 2003 webcast which briefly promised to be a new start for the show, and was then blown out of the water by BBC Wales. I rewatched the actual story again, having been underwhelmed on first watching in 2012 when I wrote:

Scream of the Shalka is the reboot that didn’t come off. It is a shame in some ways because it has its strengths – notably the animation, which is far ahead of the other three in quality, Paul Cornell’s story-line of alien beings breaking into our world from an unexpected direction, and Sophie Okonedo’s performance as one-off companion Alison, and Derek Jacobi, not for the last time, as the Master. (Also keep an ear out for a brief appearance by David Tennant as a minor character.) But the biggest problem is Richard E. Grant’s Doctor, a pale and vampire-like presence whose arrogant character lies somewhere between the low point of Pertwee’s Doctor and the mid-point of Colin Baker’s for likeability. (Which is to say, not very high.) In the last episode we are told – by the Master, no less – that the Doctor is dealing with the scars of some dreadful conflict too awful to describe, an idea brought into NewWho also; and he gradually mellows throughout the story. In the end it feels a bit like The Movie, a false start, which relies a bit too much on continuity and does not do enough to make this about a character you would want to watch another seven, or twenty-six, or fifty years of. (For instance, Old Who fans will be baffled that the Master is now n sevraqyl ebobg; those new to Who will wonder why they are meant to care.) And there is an awful lot of screaming, though of course the clue is in the title.

This time around, I took it at an episode every evening, mostly glancing at the iPad while cooking, and it works maybe a little better at that pace, with the tension of the narrative tightly linked to the episodic structure (Cornell after all knew his stuff, as a reasonably experienced screenwriter). It’s also worth noting that the Shalka!Doctor is dealing with the recent loss of a dear companion, and presumably if this continuity had been prolonged we’d have learned more about that. You can (still) watch it here.

The figure was green, its features smooth, like a polished marble statue. Its mouth was flexible and muscular, the only part of it that spoke of function over form. It was androgynous, and had no need for clothes. It was a representation of a human-being as seen from a distance, as seen from a superior culture.

I was really surprised and pleased by how much I enjoyed this book, the novelisation of the webcast story starring Richard E. Grant as the other Ninth Doctor. Perhaps it is partly that, at least in the opening pages, it so consciously draws on the style of the Dicks and Hulke novelisations of the Third and Fourth Doctor stories which meant so much to fans of the same sort of age as the author and me. But also a lot of the sequencing that didn’t quite work for me in the webcast seemed to me to be much better here: the Master’s new situation, the reasons for the Doctor’s emotional coldness, the back story to Alison’s relationship. We do miss out on Conor Moloney’s performance as Greaves, though. Perhaps the last week of work before the Christmas hols was a bad time to watch the webcast; I am certain that if I had read the book before watching it, I would have enjoyed both more.

Some of the similarities between Shalka continuity and New Who are even more noticeable here: that the Ninth Doctor is suffering PTSD after an awful war in which many people he cared about were killed, and that the new companion chooses to travel with the Doctor rather than remain in a (dull) interracial relationship. (As in Rose, there is also a monster leader underground controlling its minions who burst into the normal world to terrify humans, and the Doctor must descend to their lair to do battle, but those are fairly standard plot elements.)

The book also comes with a long afterword – a quarter of its total length – including the original story proposal and the author’s account of how the story came to be made, told with Cornell’s typical enthusiasm, but with first-hand accounts patched in from the production team as well. This may have turned out to be just a sidetrack in Who history but we are lucky that it is so well chronicled, including the story of how Cornell, on honeymoon in New Zealand, had to get a friend to break into his house to transmit the script to the BBC after an email went astray. It certainly adds to what is already a good book for fans to track down.

Not much to add this time. I really enjoyed the return to both the novelised story and the lengthy afterword. You can get it here.

The role played by the Master was originally intended to be played by a holographic representation of a former Doctor. Cornell suggested that this should be the fifth Doctor, as ‘his kind and open personality would provide a nice contrast with our rather more harsh and edgy Doctor.’112 This was a contrast he’d used before, in his New Adventures novel Timewyrm: Revelation (1991), where the fifth Doctor was portrayed as an almost saintly presence in contrast to the seventh Doctor, who carried the weight of the universe on his shoulders. This would have given Shalka a very different flavour; the fifth Doctor was established as an unambiguously heroic figure, and whilst he often demonstrated a dry sense of humour, any edge to the relationship would have had to come from Grant’s Doctor, rendering him even less sympathetic than he initially appears to be. Cornell changed this setup for two reasons: firstly because he felt that holograms had been overdone in telefantasy shows113, and secondly so that this assistant could have a ‘complicated, somewhat dangerous relationship’ with the Doctor and be ‘programmed to do the nastier things that our emotionally wounded and defensive Doctor couldn’t bring himself to do’114. Essentially then, this version of the Master would retain the amoral methodology he had often demonstrated in his prior television appearances but, with apparently less selfish aims, he was now redefined as a hero.
112 Cornell, Scream of the Shalka, p202.
113 The obvious telefantasy antecedents Cornell is referring to which feature holograms able to assist but not interfere would have included Quantum Leap (1989-93), whose main character Sam was assisted by Al, a hologram of a person from Sam’s original time; the Emergency Medical Hologram called ‘the Doctor’ in Star Trek: Voyager (1995-2001); and possibly even the command hologram from Mighty Morphin Power Rangers (1993-95). He may have also been referring to Red Dwarf (1988-99 and since revived) and Stargate SG:1 (1997-2007); however, the holographic characters in these series serve very different roles. Holography was relatively uncommon in the series to this point, only appearing under that name in The Talons of Weng-Chiang (1977), The Leisure Hive (1980), Time and the Rani (1987) and Dragonfire (1987). The series’ use of holograms has become more common since 2005.
114 Cornell, Scream of the Shalka, p202.

Arnold actually wrote the very first of the Black Archive series, on Rose which came out the year after Scream of the Shalka and thoroughly stole its thunder. The actual analytical content of the book is the shortest of any of the Black Archives I have seen so far. Given that Scream of the Shalka turned out to be a dead end in continuity, there is not a lot to say, and most of it had already been said by Paul Cornell.

However there’s one particularly interesting point covered off by Arnold in the first chapter, which is on the nature of the Doctor; namely, why is it that the average viewer (Arnold quotes Russell T. Davies and Elizabeth Sandifer, but I would agree with them) finds Grant’s performance rather lacking in vigour, while those who were present at the actual shoot (Paul Cornell and James Goss, both of whom I would normally regard as reliable witnesses) describe him as thoroughly and energetically engaged in the recording? Arnold’s answer is that the medium itself is the issue:

The problem is that each line is delivered clearly and in full before the next line begins; everyone politely waits for the other person to fully finish speaking before they begin their line. As Who’s Next‘s verdict on Shalka notes, this feeling of the ‘in-the-room intimacy of a radio drama […] sits oddly when you’re watching pictures on a screen at the same time.&lsquo;82 Conversations therefore rarely develop the energy of genuine interaction between two people, and instead feel like two people speaking in the same place and same time but not actually communicating. Whilst animation ameliorates this to a degree by the simple use of close-ups and characters facing each other, it drains the energy and emotion from performances; we don’t get proper reactions to build a scene.
82 Clapham, Mark, Eddie Robson and Jim Smith, Who’s Next: An Unofficial and Unauthorised Guide to Doctor Who (2005), P390.

This is one of the most interesting production-related insights I’ve gleaned from the Black Archive series so far.

Just for completeness, the (few) chapters of Arnold’s monograph cover:

If you’re intrigued by the possibilities of the Shalka!Doctor continuity, this book will tick your boxes. You can get it here. 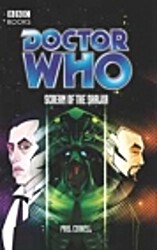 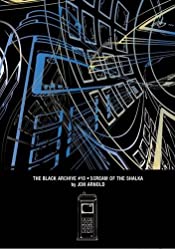 1 Response to Scream of the Shalka, by Jon Arnold (and Paul Cornell)