Posted on 26 July 2021 by fromtheheartofeurope

Latest in my series of posts about successive winners of the Tiptree, Clarke and BSFA Best Novel awards.

Second paragraph of third part of “Stories for Men”, by John Kessel:

He washed his face, applied personal hygiene bacteria, threw on his embroidered jumpsuit, and rushed out of the apartment.

I remember being hugely impressed by this story when it was a Nebula finalist back in 2003. Hugo voters weren’t, and it finished in tenth place at nominations stage, both Hugo and Nebula voters going instead for Coraline, by Neil Gaiman. On rereading I still think it is a classic, and well done to the Tiptree jury for recognising it. It's a story of a matriarchal society of human colonists on the Moon, where men have largely been disempowered for the common good; it's neither utopia nor dystopia, but a complex society which may or may not be able to anser its own questions, and where politics and violence have an uneasy and widely denied coexistence. Eighteen years on, it still resonated for me. I own it in the Gardner Dozois annual collection, which you can get here or here this John Kessel collection and in this anthology of lunar sf.

He was a typical New Man, tall, white-faced, with that characteristic shock of orange hair that makes them look constantly surprised by life. The tank farm was too far up Pierpoint to do much trade. It was in the high 700s, where the banking district gave out into garments, tailoring, cheap chopshop operations franchising out-of-date cultivars and sentient tattoos.

I didn't like it. I thought the sex was sordid, the characters unpleasant, and the plot barely comprehensible.

Seventeen years on, I don’t feel the need to revise my opinion much. For the Tiptree jury, which honoured this jointly with “Stories for Men”, the unpleasantness of the male characters was part of the point, but I really bounced off it. You can get it here.

The Tiptree jury also had three novels, four short stories and an anthology on their Honor Roll. I have read only one of the three novels, and bounced off it too. The short fiction included Karen Joy Fowler’s “What I Didn't See”, which won the Nebula in its category, two more Nebula finalists – Gregory Frost’s “Madonna of the Maquiladora” and Eleanor Arnason’s “Knapsack Poems” – and Ted Chiang’s “Liking What You See: A Documentary”, which is a favourite of mine.

That year the BSFA voters and Clarke jury chose the same book: Christopher Priest’s The Separation. The second paragraph of its third chapter is:

I hope you will remember me: I came to interview you in Antananarivo some eight years ago, about your experiences flying with the USAAF in the Chinese and Manchurian campaigns in 1942-3. You were kind enough to give me several hours of your time. From these conversations I extracted some excellent material about the fire-bomb missions in which you took part: the raids on the Japanese strongholds at Nanking and Ichang. I used most of that in my history of the campaign called The Silver Dragons: the 9th US Army Air Force in China. I recall that at the time I asked my publishers to send you a complimentary copy of the book. I realize that I never heard from you afterwards, so in case you did not receive the earlier copy I am enclosing one from the recently reissued paperback edition. As in the earlier editions, your interview features prominently in the first few chapters.

This was one of the very first books I wrote up when I started bookblogging regularly in November 2003. My review was succinct:

[E]xcellent stuff, dopplegangers, altered timelines and the second world war, as if Philip K Dick had been English and sober.

Again, I don't feel the need to revise my opinion much, especially since I've now read a few more alternate-WW2 novels. (Good ones: The Man in the High Castle, by Philip K. Dick, Jo Walton's trilogy Farthing, Ha'penny and Half a CrownTimewyrm: Exodus, by Terrance Dicks, Dominion, by C.J. SansomThe Sound of his Horn, by Sarban, SS-GB, by Len Deighton.) I think it's a really well put together exploration of several different timelines, involving the crucial choices of a pair of identical twins, one in the RAF, the other a pacifist, and the possibility of an early end to the war with a Jewish homeland in Madagascar. There aren't any clear answers, even the questions may not be all that clear, but it really keeps one reading; the alternate-WW2 novel to end all others. Great stuff. You can get it here.

As mentioned above, The Separation won both Clarke and BSFA Best Novel awards. Light, discussed above, was on both shortlists, as were The Scar by China Miéville and The Years of Rice and Salt, by Kim Stanley Robinson. BSFA voters also had the options of Castles Made of Sand, by Gwyneth Jones and Effendi, by Jon Courtenay Grimwood. Clarke judges also shortlisted Kil'n People, by David Brin, and the following year’s Nebula winner, Speed of Dark, by Elizabeth Moon. I think I’ve read all of those books and they are two very solid shortlists. Apart from Elizabeth Moon, there was no other crossover with the Nebula ballot for either that year or the next. Kil’n People, The Scar and The Years of Rice and Salt were also on the Hugo ballot, but voters at the Canadian Worldcon chose local boy Robert Sawyer’s awful book, Hominids.

Next in this sequence: 2003: Set This House In Order: A Romance Of Souls by Matt Ruff; Felaheen by Jon Courtenay Grimwood; and (gulp) Quicksilver by Neal Stephenson. 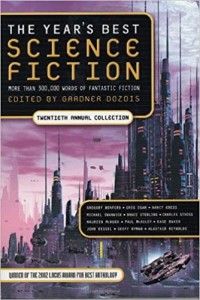 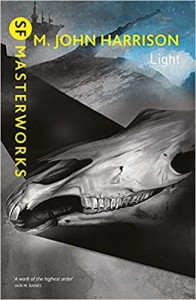 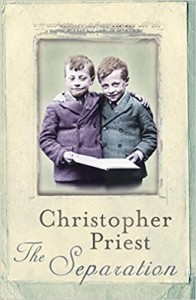