The Ambassadors of Death, by L.M. Myles (and Terrance Dicks)

Posted on 29 October 2021 by fromtheheartofeurope

The third of the Black Archive books is by L.M. Myles, who I last saw at the fantastic Gallifrey One convention last year. Here she is in the bar on the first night, in the thick of things. 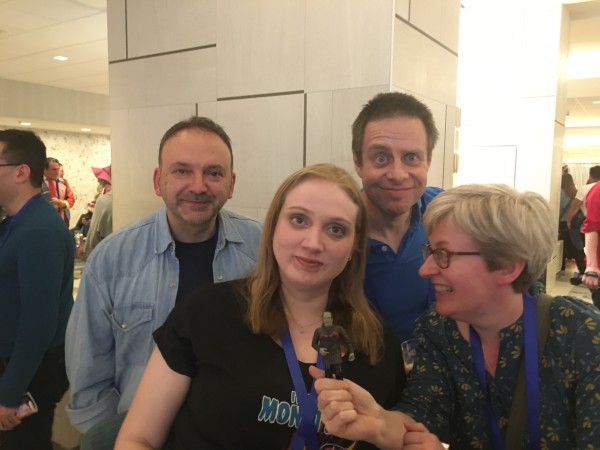 When I first watched The Ambassadors of Death in 2007, I wrote:

Jon Pertwee’s first season in 1970 was certainly his best, but also in a lot of ways quite unlike any other season before or since. The Ambassadors of Death is Who as James Bond-ish adventure story with lots and lots of shootouts and fighting, and aliens who can kill at a touch. I thought Caroline John as Liz Shaw was particularly good here, though she does scream once or twice. Not quite sure what the point of the time experimentation at the beginning was. The plot was exceptionally convoluted in order to cover the seven episodes, and I felt the camera lingered on guest star Ronald Allen for longer than the quality of his acting really deserved (some of the other recurring actors, eg John Abineri and Michael Wisher, were rather better I thought), but altogether it is pretty compelling. It’s quite uncomfortable and spiky in places; the congealing of the UNIT “family” in the next season made for a much safer and basically less exciting programme.

John Abineri does put in a good turn as Carrington – even if his means and motivation are not well explained, he is conveys the deceptively psychotic general rather well. I am, however, mystified and distracted by the cameras’ concentration on Ronald Allen as Cornish; perhaps the director was obsessed by Allen’s good looks. Come to that, I am still a little mystified as to what the story was really about. Nice to see Michael Wisher for the first time. Dudley Simpson, always reliable, utterly excels here with a Jethro Tull-like soundtrack which conveys a slightly weird yet rather English atmosphere.

Rewatching it again I appreciated all of these points, especially the Dudley Simpson soundtrack.

I still found myself baffled by the plot, and the means and motivation of the bad guys, but it’s not the only Who story of which that is the case.

I also noticed that there are practically no women in the story apart from Liz; there are two credited actresses, Cheryl Molineaux (for whom this is her final credit on IMDB, after a career that had started with the lead role in a 1961 children’s series call The Skewbald) who plays Ralph Cornish’s assistant Miss Rutherford in the first two episodes, and Joanna Ross, for whom this is the first role of a brief career, who plays an identical but quieter role in the last three episodes. (Maybe Cheryl Molineaux didn’t want to come back?) 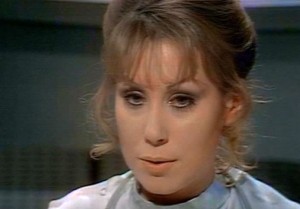 Here’s a fan attempt to make a trailer for the story – rather impressive.

The second paragraph of the third chapter of the novelisation is:

One, clearly the senior in both age and rank, was a sparely-built middle-aged man with short hair, a neatly trimmed moustache and the kind of expensive Savile Row suit that is almost a uniform in itself. He wore a red carnation in his buttonhole. His name was Carrington.

This is not particularly good. We lose out on the action scenes which were one of the original story’s strong points (along with generally good direction), and Dicks adds little new to the plot (having said which, see below for a point on a minor character) which basically exposes its weaknesses rather more mercilessly to the reader. Published in 1987, this was the last of the televised Third Doctor stories to reach print (wording chosen carefully to allow for Barry Letts’ novels based on his two audio dramas).

…we are told that Reegan (as played by William Dysart)

had been born in Ireland, though he had spent much of his life in America and other parts of the world, frequently on the run from the law. He had begun his criminal career robbing banks for the IRA, and had left Ireland in danger of his life when it had been discovered that he was keeping more of the proceeds for himself than he was donating to the Cause.

More recent events notwithstanding, Reegan’s history sounds more like Odd Man Out than anything else; Dicks celebrates his 73rd birthday this coming weekend, so would have been twelve when Odd Man Out was first released. England seems an odd choice of refuge for a former IRA bank robber to flee to.

I think I was a little harsh. Squeezing seven episodes into a Target novelisation is a considerable challenge which the late great Terrance Dicks managed effortlessly, and he also gives us brief introductory characterisation paragraphs for all of the significant characters. It’s still not my favourite novelisation, not even of Season 7 (Cave Monsters for the win!) but I should have been fairer. You can get it here (for a price).

And as for the ambiguity of Reegan, who would have predicted that a former IRA hunger striker would declare in court in 2012 that he was a British citizen and therefore should not be subject to Irish jurisdiction?

The second paragraph of the third chapter of L.M. Myles’ monograph on the story is (with footnote):

The dynamic is set up quite succinctly in the first half of episode one, when the Doctor watches the television broadcast of the Recovery 7 mission. ‘And the Brigadier thinks it’s his business,’ he says, waspishly, after spotting the military presence in mission control. ‘I suppose he’s got to do something to occupy his mind now that he’s blown up the Silurians.’ The Doctor’s rudeness might extend to the Brigadier, but the Brigadier, being fully aware of the Doctor’s brilliance and how he’s brought it to bear against alien attacks on the Earth, has considerably more patience for the Doctor’s snark than any other human. And the will to intercede on his behalf, to press him towards politeness, and to ask others for patience with his tetchy colleague. Importantly, the Doctor is prepared to listen to the Brigadier on these points: when he takes the Doctor aside after he barges into Space Centre, and reminds him that there is a hierarchy here, and that Cornish is in charge, the Doctor calms down instantly, and takes the point. This Doctor, more than any other, is aware of human hierarchies, having been forced to live within them for an extended, continuous “amount of time. At the Brigadier’s urging, he attempts politeness and persuasiveness, arguing that the message must be decoded for the safety of the astronauts, who are Cornish’s primary concern. ‘I suppose we must try everything,’ says Cornish, conceding both to practicality – whatever they can do to help the astronauts, they must – and the Doctor’s argument, whilst subtly, and so Britishly, rebuking the Doctor for his rudeness2.
2 Episode one.

Again, it’s not my favourite story, but Myles successfully persuades me that there is quite a lot going on here, with chapters on:

As is probably clear, I don’t go all the way with Myles on this – the internal inconsistencies annoy me too much – but it’s still nice to read someone else’s appreciation, even for something I don’t like as much as she does. You can get it here. 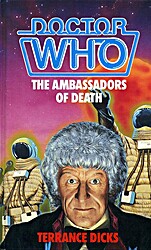 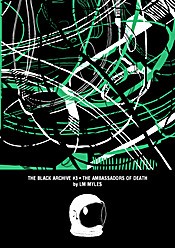 1 Response to The Ambassadors of Death, by L.M. Myles (and Terrance Dicks)