Doctor Who and the Krikkitmen, by Douglas Adams and James Goss

Posted on 21 February 2018 by fromtheheartofeurope

Sometimes the Doctor vanished loudly, with a comforting little yell as he fell into something.

This is surely the last of the unpublished Douglas Adams scripts to surface. Back in 1976, Adams had actually submitted a story outline to Robert Holmes involving warlike aliens with a peculiar connection to cricket – this in itself was surely inspired by "Volcano", the seventh episode of one of my very favourite stories, the epic Daleks' Master Plan, broadcast on New Year's Day 1966, in which the TARDIS, pursued by Daleks, materialises at Lord's during a cricket match. Actually, never mind me, here's Dennis Spooner's script:

(In the radio commentary box, two commentators, Trevor and Scott, are watching England play a test match against Australia.)

TREVOR: Well, the English batsmen are really fighting against the clock now, Scott.
SCOTT: My word, yes. Seventy eight runs in forty five minutes to win.
TREVOR: It really has been an exciting game, hasn't it, Scott?
SCOTT: Very exciting.
TREVOR: Well, let's have a look at the scoreboard, shall we?

(The TARDIS materialises on the outfield.)

TREVOR: Now, you'll see… Goodness me, take a look at that, Scott.
SCOTT: Take a look at what, Trev?
TREVOR: There's a Police Telephone Box on the pitch.
SCOTT: My word, yes.
TREVOR: Well this really is extraordinary. You don't remember anything like this happening before, do you, Scott?
SCOTT: No. (pauses to think) No.
TREVOR: (looks behind him to where a researcher is hastily poring over cricketing manuals) Well, anyway, Ross is looking through the record books and if there has been anything like it before, I'm sure he'll find it for us.
SCOTT: You know, Trev, this puts a new light on the game.
TREVOR: What light's that, Scott?
SCOTT: Well, I know your ground staff are excellent, but even assuming they get rid of it in say, ten minutes, England will still have to get their seventy eight runs in… thirty five minutes.
TREVOR: Yes; yes well I think we can safely say this has been a very bad break for England.
SCOTT: A very bad break. Especially as the weather's been holding off so well.
TREVOR: Yes it has, hasn't it. Been holding off remarkably well. Well, let's have another look at the scoreboard shall we, although not very much has been happening these last few…
SCOTT: It's making a funny noise.
TREVOR: What's that, Scott?
SCOTT: A funny noise coming from the Police Box.

THE DOCTOR: Yes, it's definitely some sporting occasion.
SARA: Oh, I hardly think so, Doctor.
STEVEN: Was it on Earth, do you think?
THE DOCTOR: Oh, possibly, my dear fellow, possibly.

The cricket commentators Trevor and Scott were played respectively by Roger Brierley and Bruce WightmanHammersmith Park, with a miniature model Tardis used for the shot. The whole episode is, alas, completely lost from the archives apart from a few photographs. However Loose Cannon have done a reconstruction with archive pictures and their own externally sourced footage; you can watch it here with the cricket section starting at 08:12. (It has been unsportingly pointed out that although England were indeed playing Australia the day the episode was broadcast, the match was in Melbourne rather than St John's Wood. It was a draw.)

Douglas Adams fans will at this point be shifting uncomfortably and muttering that this whole plot was basically recycled into the third Hitch-Hikers Guide to the Galaxy book, Life, The Universe and Everything, published in 1982 (also available as an audio play recorded in 2003, featuring a posthumous appearance by Douglas Adams). And that's basically right. The two stories share the vicious Krikkitmen, whose planet is trapped in a timewarp, and who are seeking to restore a cosmically important artifact which is shaped like a wicket and has five parts scattered through the cosmos. (That last bit will also be familiar to Who fans from the Key to Time.) So, given that James Goss is trying to channel the spirit of Douglas Adams in rewriting a Doctor Who story that Adams himself had already rewritten, is there really any point?

Actually, yes. It works rather well. Goss has updated Adams' original Fourth Doctor/Sarah concept to include instead the second Romana and K-9, which effectively sets the story around the same era as City of Death, also of course recently novelised. And he takes Adams' core concepts and runs with them in a different direction, while remaining aligned with the story's original core. In particular, he has paid a bit more internal homage to the continuity of the Time Lords and Gallifrey than Adams was interested in doing, which does make it knit more easily into the Whoniverse. The one scene that doesn't work particularly well is the early passage of the Krikkitmen's massacre at Lords; massacres are not terribly funny, and Goss doesn't really try to make this one funny either, but it therefore falls rather flat. However, it's possible to blame Adams at least as much for that misfire. After that, we go to interesting places, on an enjoyable and yet slightly terrifying journey.

This isn't the best Goss or Adams story, and to be honest I would probably have enjoyed it more if I cared even slightly about cricket (which I don't). But it's well worth a look even for non-completists. 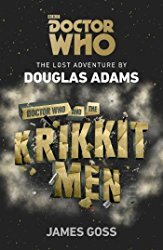