Posted on 23 February 2022 by fromtheheartofeurope

So, I’m on my flight out of LAX, having spent the weekend at Gallifrey One and then Monday and yesterday exploring Los Angeles. 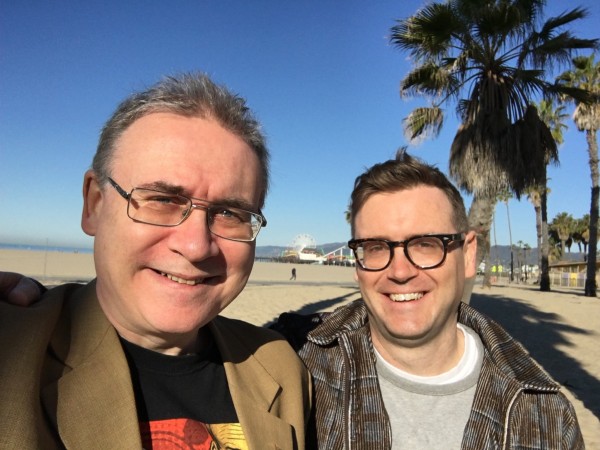 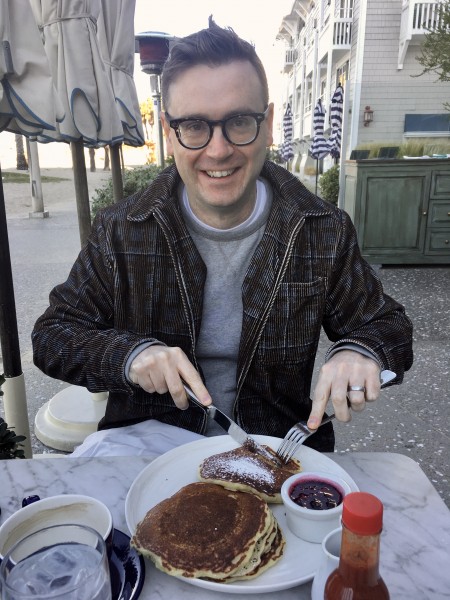 Gallifrey One! What to say? The previous two times I attended, I took lots of cosplay photographs; this time I took fewer, but I hope these convey some of the atmosphere. 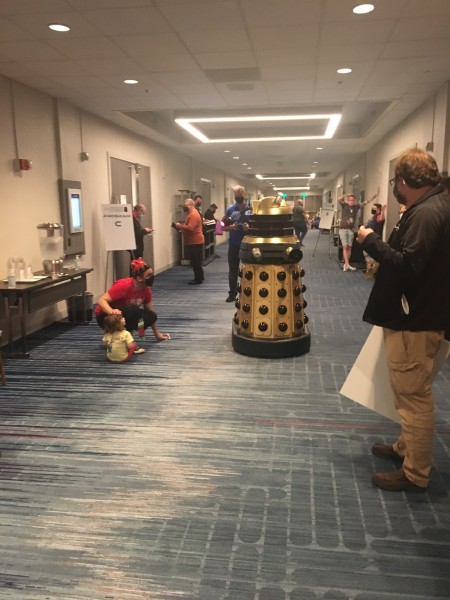 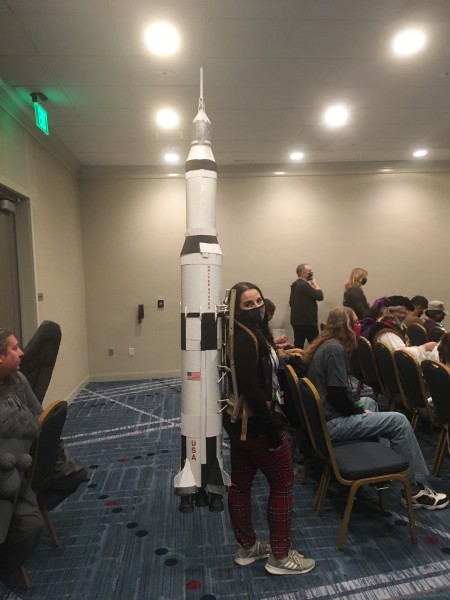 And a shoutout to H who is one of the three Eighth Doctors here (her picture, not mine): 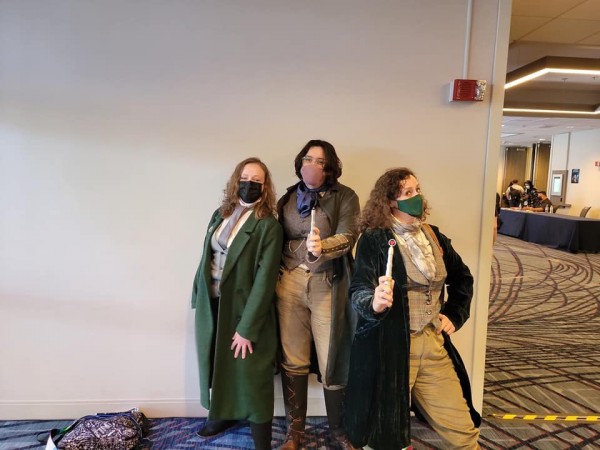 The headliners were Sylvester McCoy, Mandip Gill, Jo Martin and Fraser Hines. McCoy and Hines are old friends of Gallifrey One; Gill and Martin are new, and both did lovely interviews about the impact the show, and its fans, have had on their lives. Jo Martin, a long-term fan herself, had not told her son about that plot twist in Fugitive of the Judoon before it went out; quite right too, but it must have been an interesting evening in the Martin household. I got photos with Mandip Gill, Jo Martin, and Elisabeth Sladen’s daughter Sadie Miller; this is my favourite. 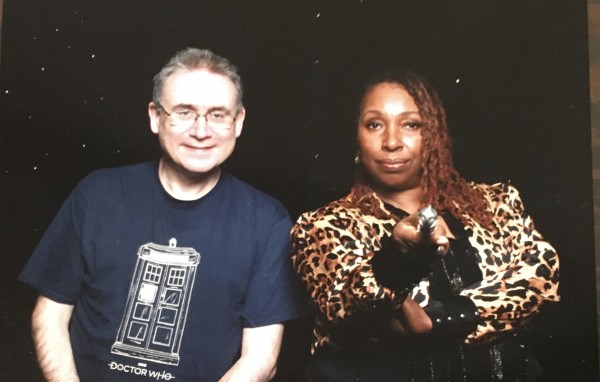 And of course quite apart from the specifics, it was just wonderful to be at an in-person event again, able for instance to meet up with Paul Cornell and the Thomases, to discuss The Evil of the Daleks with John Peel who wrote the noveisation and Rob Ritchie who did the animation, and tp have an impromptu dinner with Matthew Sweet, whose work I really like.

On Sunday evening, the convention having ended, I met up with some long-lost cousins: L, who I met through 23andMe, her father W, my third cousin (we are both descended from William Charlton Hibbard and Sarah Ann Smith) and N, L’s mother and W’s wife. These are people of whose existence I was completely unaware two years ago. I had an instant shock of recognition on seeing W, who is thinner, taller and ten years older than me, but immediately looked like family. We got on like a house on fire. Unfortunately we failed to take photos, but L joined me for the first part of my excursion the next day. She shares 0.41% of my DNA, exactly in the right range to be my third cousin once removed, which is our actual relationship. (I am not slouching here – like her father, she is taller than me.) 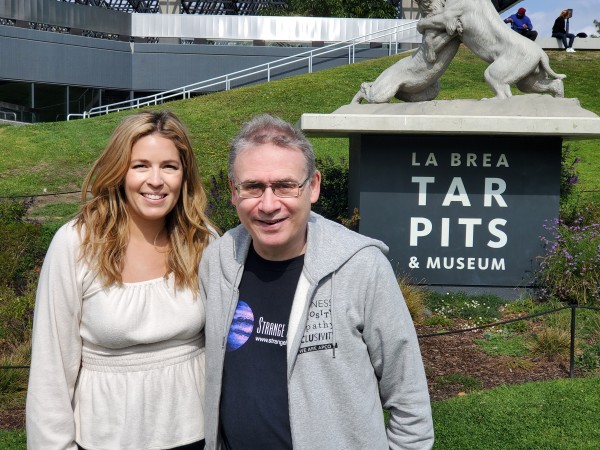 As you will have spotted, my Monday morning cultural excursion was to the La Brea Tar Pits museum, which I have known about since I was six (I am now 54). Surprisingly central to LA, this area has preserved the remains of tens of thousands of animals that wandered into a sticky field after the last ice age, got stuck and eventually died. At the entrance there is a moving sculpture of Daddy Mammoth and Baby Mammoth looking on in despair as Mummy Mammoth is swallowed by the pool (which bubble non-stop with newly released petroleum gases). 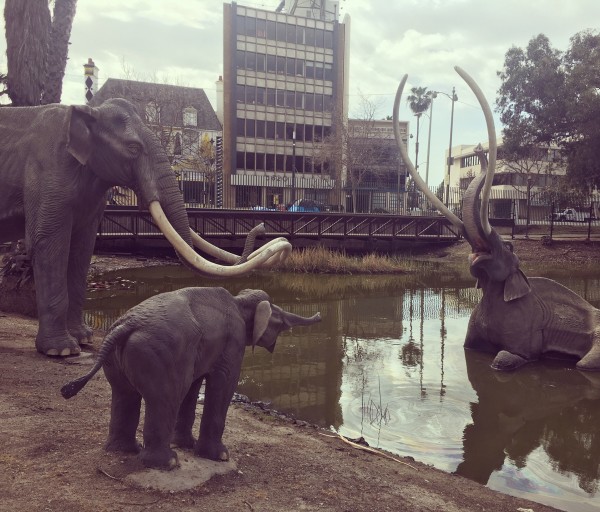 An educational notice pinned to the fence explains that we now know that mammoths did not live in nuclear families, but in female-led herds, and that most of the mammoths discovered at La Brea were males, presumably solitary. Predators are over-represented among the fossils, possibly because they ran in to eat the mammoths etc and then got stuck themeslves. Here is L again, with C, another local friend of mine, with the sabre-tooth tigers. 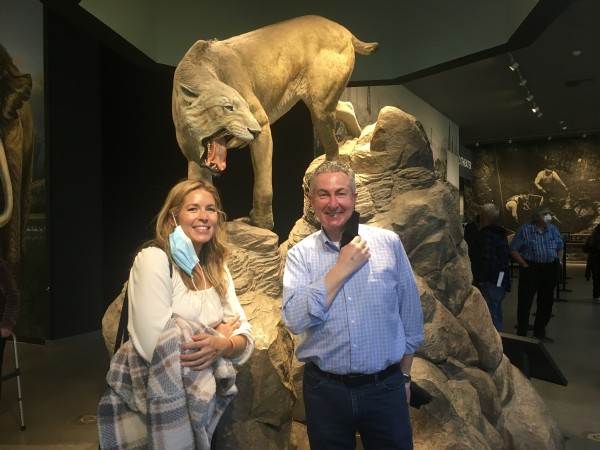 After lunch, C and I went up to Griffith Observatory to enjoy the view. 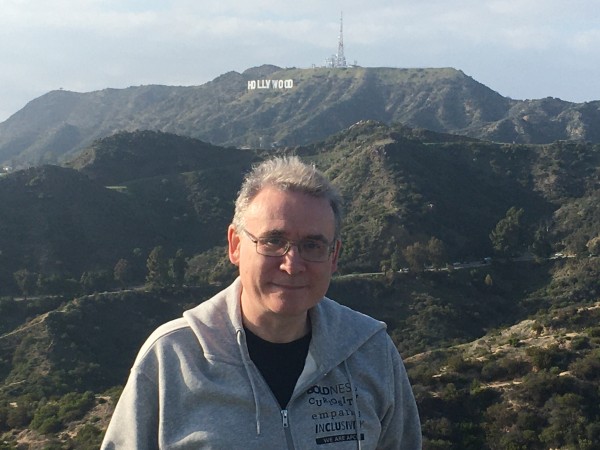 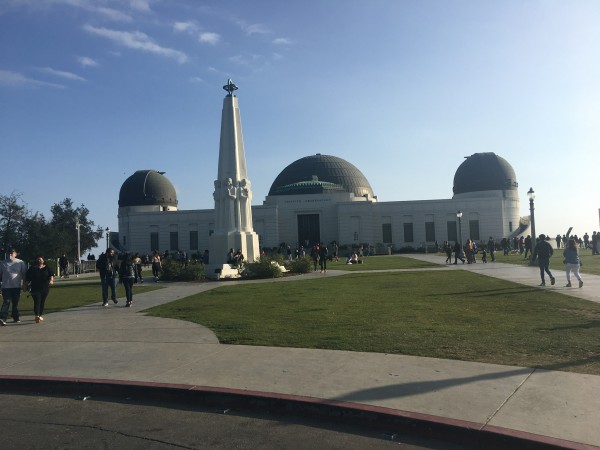 No famous discovery was ever made at Griffith Observatory, but it has an iconic status from its appearance in films. I was very struck by the Astronomers’ Monument in front, featuring Art Deco depictions of Hipparchus, Herschel, Kepler, Newton, Galileo and Copernicus. 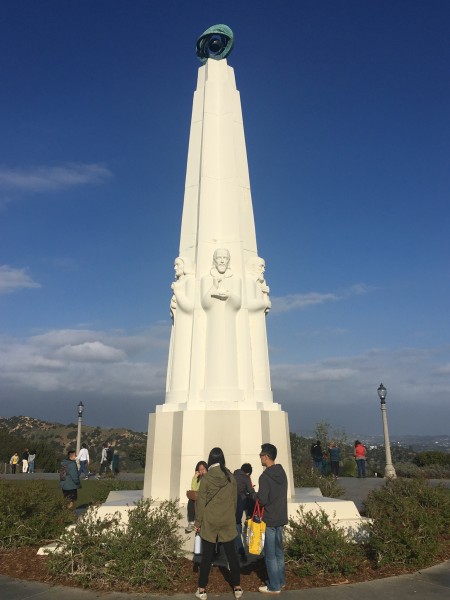 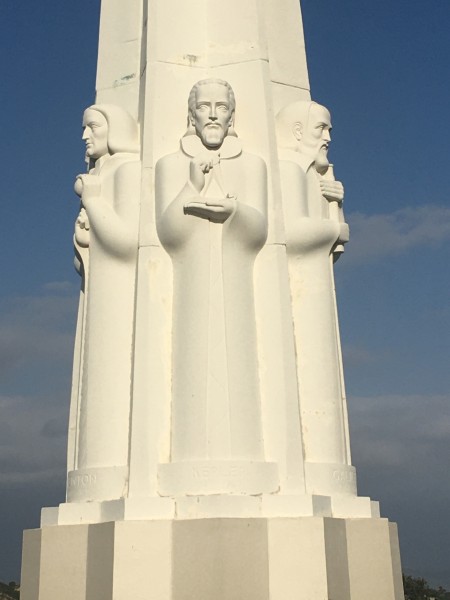 We spent the evening playing board games and drinking cocktails at the sf-themed bar in Hollywood, Scum and Villainy, at the invitation of fellow-Whovian LA from LA, who took this picture. 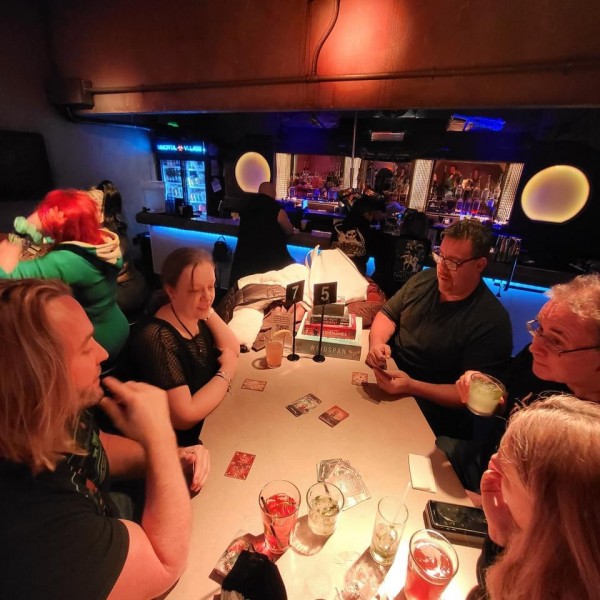 Yesterday morning I decided to investigate the origins of the city. This is the Avila Adobe, the oldest building in Los Angeles, dating from 1818, built by the then alcalde (mayor/governor) and used by the Americans when they came marching in. It was lovingly restored in the 1920s and 1930s by local activists. Entry is free, and amusingly the guard who checked my vaccination certificate turned out to be a Doctor Who fan. 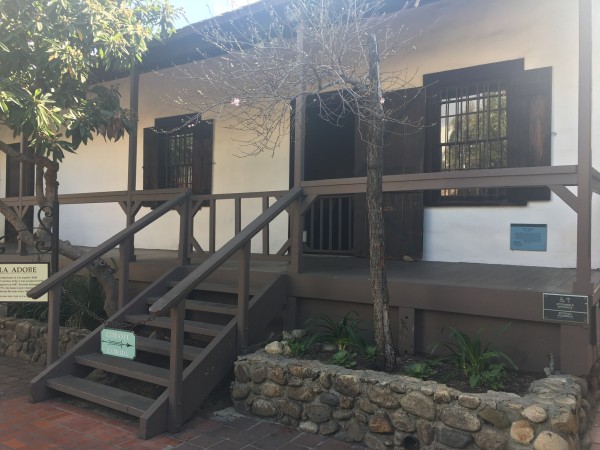 It’s a nice little exhibit giving a picture of Los Angeles when it was a very small settlement indeed. But you need to be careful in the garden. 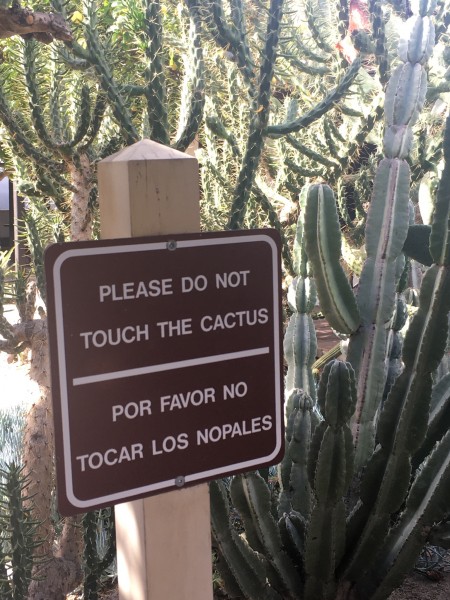 And my final cultural stop was The Last Bookstore, an amazing warren of shelves. 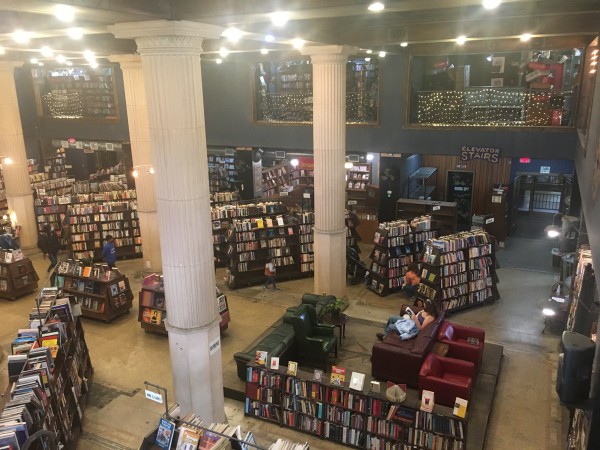 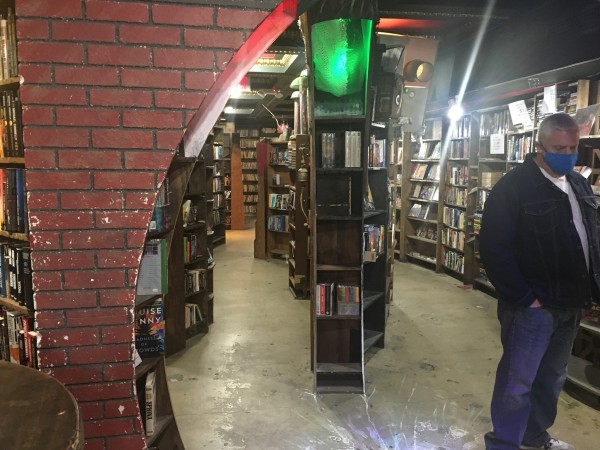 Finally I joined forces with H once more and we met up with some locally based work colleagues in Santa Monica, ending where I had started on Friday morning. No photographs from our social gathering, but H and I were very intrigued by this ballot box: 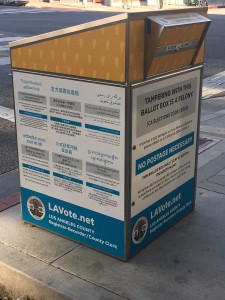 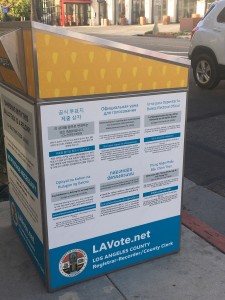 The languages appear to be Armenian, Chinese, Farsi, Hindi, Japanese and Khmer on one side, with Korean, Russian, Spanish, Tagalog and Vietnamese on the other, listed in alphabetical order of their English names.

And we resisted the temptation of this exhibition. 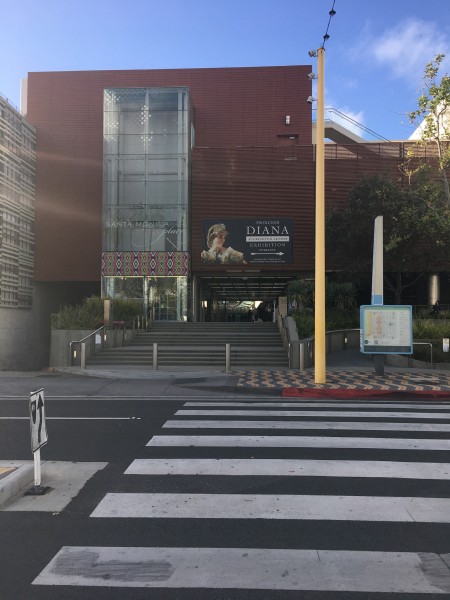 On my way to Seattle now. I shall report back.

1 Response to Farewell to LA