More on the inking of Edward Heath

Posted on 14 January 2015 by fromtheheartofeurope

A kind friend with access to newspaper archives has supplied me with four more clippings, three from the Times and one from the Guardian, about the incident in which British Prime Minister Edward Heath was covered with ink on his arrival to sign Britain's treaty of accession to the European Communities.

From the Guardian, 1 March: 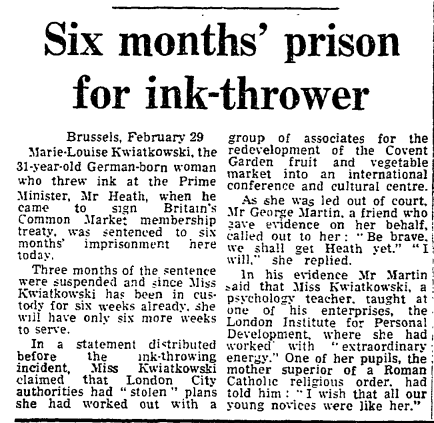 From the Times, 26 April (my fifth birthday):

And from the Times Diary column, 24 June: 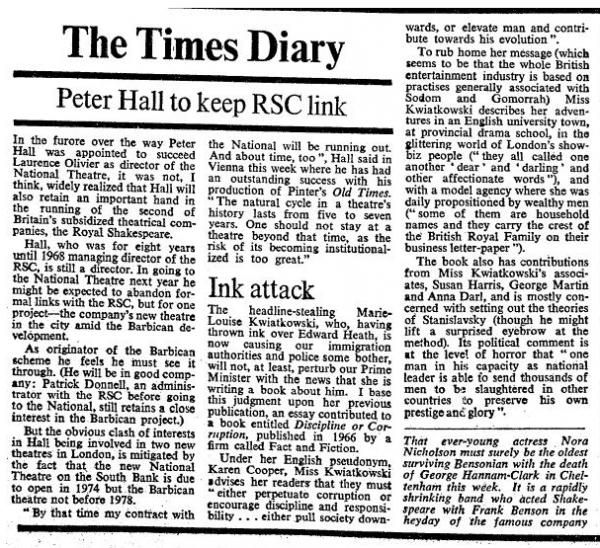 (It is nice to see a reference to Nora Nicholson just after I watched a 1971 episode of Here Come The Double Deckers, "The Helping Hound", in which she plays a leading guest role.)

Anyway.Mr Martin's reported remarks in January seem extremely disingenuous. Having equipped the two women with faked press passes, did he imagine that they were just going to pull the Prime Minister aside in Strasbourg or Brussels, for a quick and friendly chat about Covent Garden, as a result of which he would see the error of his ways? I can't quite see it; in fact, I bet he bought the ink as well.

Google doesn't bring me very far, but does at least take me to three published books.

One does get a sense of a small group of highly motivated people (or, if you like, a mini-cult) who were fixated on their plan for the redevelopment of Covent Garden as the vector for the future civilisational progress of humanity. Perhaps we should be glad that the ink-throwing incident was the height of their activism. (There is no evidence that I Challenged Ted Heath was ever published.)

I have ordered Discipline or Corruption, which sounds rather intriguing, and will report back. Thanks again to the person who supplied the clippings.

1 Response to More on the inking of Edward Heath