The Inking of Edward Heath

Posted on 10 January 2015 by fromtheheartofeurope

A few weeks ago, Lieven Smits reminded me of the incident on 22 January 1972, when Edward Heath, the British Prime Minister, was spattered with ink on arriving at the Egmont palace in Brussels to sign the treaty admitting the UK to the European Communities. It's a striking moment and the press photographers were well placed: 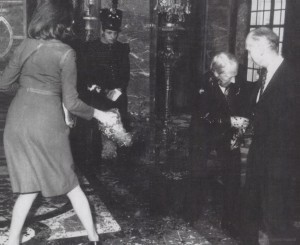 I have attended at least a dozen events in the Egmont Palace since moving to Brussels in 1999, so I know the scene of the event very well; and I will smirk next time I wander up to the foot of the grand staircase in the entrance lobby.

But, I wondered, what this all about?

And her protest was not, in fact, an anti-European one. There were anti-European protesters outside the palace, led by Christopher Frere-Smith, who was arrested, but she was not one of them. Instead, and this is where it gets a bit weird – well, here's the Glasgow Herald's version:

So, she was protesting that the gummint had personally stolen her plans for the redevelopment of Covent Market into a conference centre – in other words, not actually a protest against government policy, but a gripe that the government had agreed with her preferred outcome without giving her credit. Here is the transcript of ITN's News at Ten coverage of her eventual conviction and sentence: 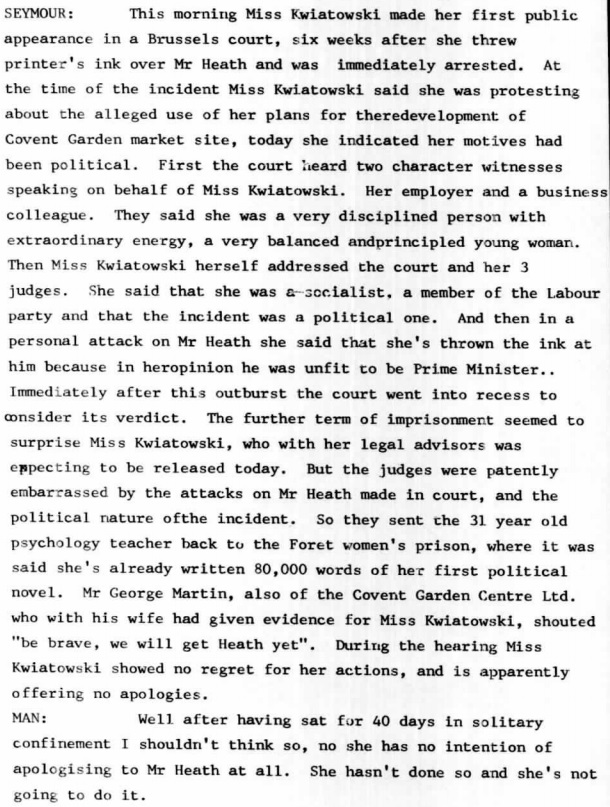 "Andrew" here is presumably Andrew Gardnerfuture author of Harry's Gamehere (note future MEP Lord Dartmouth, Princess Diana's step-brother, hiding behind his mother in one of the photographs) and also here, the massive redevelopment plans for Covent Garden had been agreed in 1968, before the government came to office; but by early 1972, all concerned were preparing the ground for dignified retreat, paving the way for the creation of the streetscape that we know today. It would have made more sense (admittedly, only a little more) if Kwiatkowski had protested Heath's likely dumping of the plans rather than his supposed "theft" of them.

And what of her employer, George Martin, who appears to have escaped any punishment for helping her to forge her press pass? I think we can be fairly certain that it wasn't this chap. But could it have been Basil Brush's scriptwriter? Or the Beatles' manager? Neither appears to have had a particularly strong Swedish connection, so it was probably someone else entirely.

There are various other bits of mythology. Was Heath's replacement suit supplied by Michael Palliser, or by Sir John Beith? Walter Scheel, the German foreign minster, quipped that all future German ambassadors should be chosen for their physical similarity to the foreign minister of the day, in case this should happen to him or his successors. (Scheel also suggested that they try and pass off the incident as honoring an ancient Norwegian custom of throwing ink at people to whom you wish the best of luck.)

See also the legal analysis (in French) here, pp, 321-323, which asserts that Kwiatkowski was not prosecuted under the 1852 law against attacking foreign heads of government because Heath himself did not wish to press charges, and not (as another bit of Belgian mythology has it) because the law applied only to Heads of State and Heath was not the Queen (it seems clear that the law would have applied to him as well).

As for Marie-Louise Kwiatkowski, here's a photograph from June 1972 found on eBay: 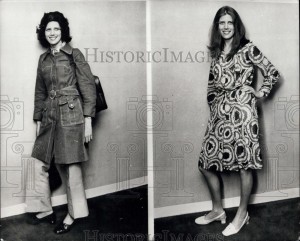 [eBay description] This is an original press photo. The Girl who threw ink over Mr.Heath is thrown out of Britain: German-born- Marie-Louise Kwiatkowski, 31, the girl who threw ink over Premier Edward Heath in Brussels five months ago, and was three times refused entry into Britain, sneaked back here at her fourth attempt wearing a dark wig to fool the immigration officials, Karen Cooper, the name she used, arrived back in this country aboard a passenger ship from Ansterdam and then hitched several lifts to London five days ago. Yesterday the Special Branch moved into the London hotel, where she was escorted to Heathrow Airport and put on a flight to Frankfurt. Photo shows Karen Cooper (real name Marie Louise Kwiatkowski) is pictured in these two photos at her London Hotel yesterday. On the left she is seen wearing the clothes and wig she wore to cover her long fair hair when she entered the country five days ago, and on right as she really is.

The taking of the photograph is the subject of a somewhat incomprehensible article in Der Spiegel, which may intermingle a different story entirely involving nude photography and the Norwegian artist Gerd Tinglum

If Marie-Louise Kwiatkowski is still around, she turned 74 last Thursday. I wonder if she got anywhere with her political novel.

1 Response to The Inking of Edward Heath